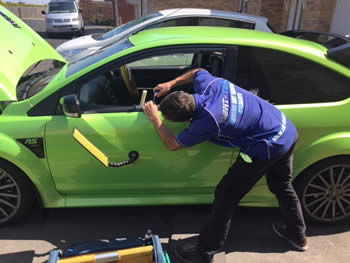 Access is usually required to the rear of the dent, where ultimately the car body dent is massaged back into shape using specialist PDR tools.

Another term is "Cold Metal Repair" however the terms Paintless Dent Removal & Paintless Dent Repair are more widely used and is fast becoming the people's first choice when car body repairs are required.

The early days of removing dents from car body panels without the use of filler & paint was confined to men employed to remove manufacturing imperfections found at the end of car production lines (1940's - 1950's). Since then the tools, techniques & skills have improved dramatically.

The more preferred method of Paintless Dent Repair is to use steel bars to access the rear of the dent. A Professional Dent Remover should be able to remove a dent with almost any tool, even your key fob if the dent would allow. The tools he uses are there mainly to gain access and to make his life easier.

Dent tools come in many different lengths, shapes and sizes. Each tool is uniquely designed for a specific purpose and a PDR Technician will carry many tools to help him access even the most difficult areas of a vehicle. 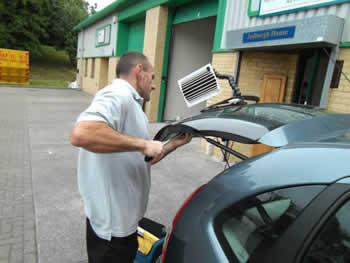 The Dent Repair Specialist uses the power of reflection to see the minute details of the dent. The Fog or Line Board are the most commonly used forms of reflection, natural and artificial light are also used.

The boards cast a reflection over the dent which is distorted by the different shapes in the car body panel.

The Dent Technician then uses the reflection to guide his tool tip to exactly where he needs to be. He will then make many hundreds of tiny pushes with the tool tip, gradually returning the car body panel back into shape. His ultimate aim is to make true the reflection on the panel.

The fog board also shows lines of stress & twist within the body panel, this is important information to the dentmaster as it will dictate the best method of dent removal.

Where access is extremely restricted or even non existent, the glue pulling method may be used. If the Dentmaster cannot find access to the rear of a panel, glue tabs can be attached to the dent where it is then pulled out as apposed to being pushed.

Glue tabs come in many different shapes and sizes, each being used for a particular shaped dent. Long straight tabs for creases for example, small round tabs for minor dents and so on. Glue is heated up using a glue gun then applied to the chosen tab. The tab is then pressed into the dent and the glue allowed to set. Once a Slide Hammer or Mini Lifter is attached to the tab, outward pressure is then applied causing the dent to lift out. This method is often used on larger dents to lift the bulk and release pressure within the panel.

These methods of repair are very different however the same amount of skill is equally required. The use of reflection and the desired outcome remains exactly the same

No two car dents are the same, but there are general categories of types of dent which will dictate which of the many PDR techniques will be best suited to remove the dent. You can read more about the type of car dent by clicking the read more below.