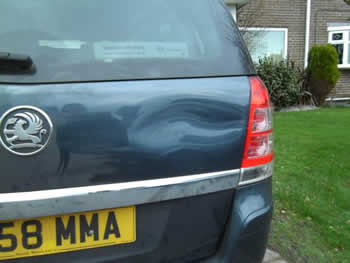 These dents are often caused by people sitting or falling on the panel, even leaning on panels can cause quite large indentations. Vandals running over cars, drunk people dancing and often a heavy kick on any side panel will cause a very large dent.

Dents that have been caused like this are usually very large however in most cases ( but not all ) smooth in nature.

With these dent types there are often the presence of what an Expert Dent Repairer would call a crown. When metal is forced inwards it is forced to gather else where forming a ridge or a lump, this lump is called a crown.

The presence of this ridge indicates that the panel has been well stretched and in most cases, it is the crown locking the dent down. A Professional Dent Repair Man has methods to soften these crowns which enables him to gradually repair and remove the dent.

Not all large area dents are caused by people and many are caused by other vehicles. Mis judging distances or not seeing posts etc are often the cause of large dents in the rear tailgate for example.

Large panel areas such as the roof and bonnet have a network of internal braces which are there to give the panel its strength. These braces are then glued or bonded to the outer skin making the panel rigid. When the car body panel has been dented, the internal structure also becomes bent therefore holding the dent in place.

A Trained PDR Technician using specially designed tools and equipment will gain access to this network of strengtheners in order to remove the bonding and release the pressure. Without doing this, the dent would be impossible to repair. 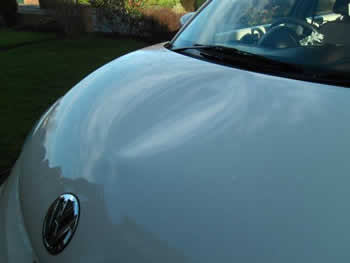 These dents are extremely visible and look very dramatic, many looking unrepairable. However a Highly Trained Dent Expert with good access to the area can usually repair this type of panel dent to a very high standard.

With dents of this size it is unlikely the Dent Professional will achieve a 100% repair though it is very possible to hugely improve the damage, making it barely noticeable.

Larger car dents have the biggest impact on a cars perceived value & are more likely to deter prospective buyers.

A point to note is that the cost of paintless dent removal (PDR) is not always determined by the size of the dent.